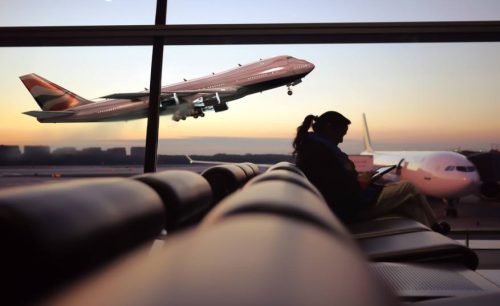 Because comparisons between 2021 and 2020 monthly results are distorted by the extraordinary impact of COVID-19, unless otherwise noted all comparisons are to November 2019, which followed a normal demand pattern.

– Total demand for air travel in November 2021 (measured in revenue passenger-kilometers or RPKs) was down 47.0% compared to November 2019. This marked an uptick compared to October’s 48.9% contraction from October 2019.

– Domestic air travel deteriorated slightly in November after two consecutive monthly improvements. Domestic RPKs fell by 24.9% versus 2019 compared with a 21.3% decline in October. Primarily this was driven by China, where traffic fell 50.9% compared to 2019, after several cities introduced stricter travel restrictions to contain (pre-Omicron) COVID outbreaks.

– International passenger demand in November was 60.5% below November 2019, bettering the 64.8% decline recorded in October.

– European carriers’ November international traffic declined 43.7% versus November 2019, much improved compared to the 49.4%% decrease in October versus the same month in 2019. Capacity dropped 36.3% and load factor fell 9.7 percentage points to 74.3%.

– Asia-Pacific airlines saw their November international traffic fall 89.5% compared to November 2019, slightly improved from the 92.0% drop registered in October 2021 versus October 2019. Capacity dropped 80.0% and the load factor was down 37.8 percentage points to 42.2%, the lowest among regions.

– North American carriers experienced a 44.8% traffic drop in November versus the 2019 period, significantly improved over the 56.7% decline in October compared to October 2019. Capacity dropped 35.6%, and load factor fell 11.6 percentage points to 69.6%.

– Latin American airlines saw a 47.2% drop in November traffic, compared to the same month in 2019, a marked upturn over the 54.6% decline in October compared to October 2019. November capacity fell 46.6% and load factor dropped 0.9 percentage points to 81.3%, which was the highest load factor among the regions for the 14th consecutive month.

– Australia remained at the bottom of the domestic RPK chart for the fifth consecutive month with RPKs 71.6% below 2019, albeit this was improved from a 78.5% decline in October, owing to the reopening of some internal borders.

– US domestic traffic was down just 6.0% compared November 2019 – improved from an 11.1% fall in October, thanks in part to strong Thanksgiving holiday traffic.