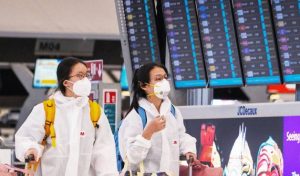 Research from hospitality consulting group C9 Hotelworks and Delivering Asia Communications focused on domestic inter-Thailand visitor market whose size at more than 227 million in 2019 stole the limelight versus 39.8 million international visitors. This set the event stage for a compelling look into the pent-up demand of local travelers who are now being targeted by Thai hotels and tourism establishments.

In a series of random polls as part of C9 and Delivering Asia’s market insight held over the weekend in Bangkok, an assortment of Greater Bangkok residents that represent more than 15 million people in the expanded metropolitan area voiced a clear preference for less dense, more natural provincial destinations. Those most mentioned were the islands of Koh Chang and Koh Kood and mountain areas of Phetchabun, Nan, Pai and Mae Sot.

In a key segment of the event by global hotel intelligence group STR, which zeroed in on the country’s gateway capital, Area Director – Asia Pacific Jesper Palmqvist said “as Thailand’s economic engine, Bangkok will need to lead by example coming out of the crisis and promote and enable the domestic business that exists. In hotel metrics, this will change the definition of what are ‘acceptable performance levels’ are.”

As to what lays ahead for hotels Palmqvist added “forget about hitting 2019 levels again anytime soon and instead focus on recalibrating what acceptable hotel trading levels are. There is a case to be made for either economy and midscale or luxury properties to emerge more efficiently. Though the question remains, with tighter traveler belts on the horizon, which class of hotel will represent the fastest route to longer term recovery?”

Summing up the takeaway points of TTF2020 – Special Bangkok Edition, C9’s Managing Director Bill Barnett said “while international tourism remains a work in progress that is highly leveraged on bilateral cross-border agreements and restoration of airlift, the near-term goal of hotels is to attract cash flow. Expect Thailand to take to the road in considerably greater numbers for the remainder of 2020 and the industry will have to fish where the fish as part of the recovery journey ahead.”